The aim of this symposium is to bring together evolutionary biologists interested in using genomics to understand adaptive processes and evolutionary history and to discuss recent progress and future prospects in this field. Population genomics deals with three fundamental questions: (1) How much genetic variation exists in populations? (2) How is this variation maintained? (3) What is the genetic basis of evolutionary change? While population genomics has answered the first question, the second and third remain incompletely understood.

We plan an exciting diversity of talks on cutting-edge topics in adaptation genomics, including on the importance of temporally and spatially varying selection in maintaining variation; on the importance of history, hybridization, and introgression in patterning such variation; on appropriate null models of evolutionary change that incorporate demography; on selective sweeps versus polygenic adaptation; and on identifying and validating targets of selection. We encourage contributions from both empirical and statistical/theoretical population geneticists, especially from early career researchers. Apart from fostering in-depth discussion, a tangible outcome of this symposium will be a targeted review submitted to JEB.

Dr. Nicola Nadeau (Lecturer since 2019, University of Sheffield)
Dr. Nadeau works on the genetic underpinnings of adaptive evolution, speciation and sexual selection in natural populations. Current projects in her lab focus on the evolution, genetics and development of iridescent structural colour and adaptation to altitude in tropical insects. In 2010 she co-authored with Chris Jiggins an influential review in Trends in Genetics on the subject of our symposium, “A golden age for evolutionary genetics? Genomic studies of adaptation in natural populations”, the subject of our symposium. Link: https://nadeau-lab.group.shef.ac.uk/people/nicola-nadeau/ 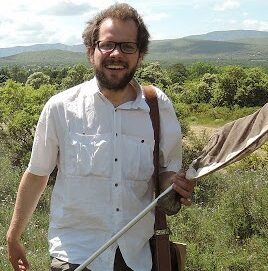 Dr. Konrad Lohse (Lecturer since 2018, University of Edinburgh)
Dr. Lohse is interested in understanding how recent, population level processes have shaped sequence variation in genomes. His research combines the development of statistical methods for estimating demographic history and selection from genomic data with empirical population genomic work on speciation and community evolution in a variety of (mainly insect) systems. Current empirical work in his lab focuses on the evolution of barriers to gene flow and local adaptation in butterflies. Link: https://sites.google.com/view/lohselab/people/konrad-lohse

The following DrosEU members has also collaborated in the proposal:

This symposium is organized on behalf of Drosophila Population Genomics Consortium (DrosEU), a consortium funded by an ESEB STN grant